Primarily, this study explored elements related to Agile processes, practices and principles, however, Agile is much more than. The elements investigated in this study are found in the inner most circles of figure 6.1 below which depicts the Agile overarching mindset. The study was conducted in a context that is deprived from private sector methodologies in particular formal practices that organize employees efficiently and effectively. This study provided an opportunity to introduce fresh operational processes and practices which align themselves to the changing requirements, and principles which move away from the command and control, and chain of command style of management. 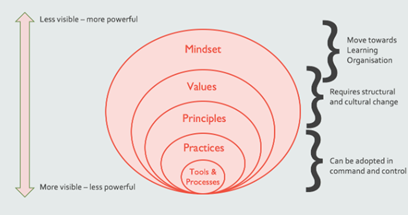 Public servants were introduced to new process and practices such as, the daily team and work cycles meetings, and the regular reviews of objectives and tasks with attached priorities. Also, the study introduced the concepts of short work cycles, obstacles handling, and the critical roles of a team facilitator and a section objectives (product/service) owner. Such processes and practices are easy to comprehend, practical to implement in any context and should improve work organization, however without principles they may be counter-productive. Principles may be interpreted as the commitments all key stakeholders make to form the foundation of a system like Agile. In this study the main principles introduced were the shift to ‘self-managed and autonomous teams’, and the ‘short cycles’ that all activities are programmed around. Consequently, these will guide public servants’ values as indicated by the participants themselves during the investigation such as, ‘we feel more trusted, responsible for work, and hence we try to achieve targets according to set timelines’. Without principles, employees will optimize around other beliefs and practices which may deny the public service from achieving more with its existing resources.

If we group the important elements studied in this project and the main ideas that are most often referred to in Agile literature we can conclude that the methodology in practical terms does the following: ‘divide goals into manageable tasks’, ‘plan and prioritize’, ‘focus on getting things done’, and ‘make employees responsible’ (section 2.1.5). In addition to the principles mentioned earlier on that is, self-managed teams and short cycles, the above can be achieved as follows:

The only structural change required is the introduction of the objectives owner and team facilitator roles which can be easily taken up by existing positions within the public service as has been identified in this study. Once, Agile practices are harmonized across the public service, there will be monthly or quarterly meetings dedicated to all or Ministerial objectives owners and team facilitators. The aim is to enhance the overall performance of the public service such as, exchanging team members, aligning cycles and identifying problems impacting teams’ performances.

Qualitative research is primarily exploratory and hence, it was used in this context as to gain an understanding of how Agile concepts may impact public service operations. The risks were too high to address the research otherwise. Participants’ understanding of a simulated (table top) Agile scenario in the public service would not have been possible without a one-to-one explanation. Also, participants had to be allowed to express themselves freely given the innovative approach of Agile in a context such as the public service. Qualitative research helps to develop ideas for potential future quantitative research and in actual fact, the experience I gained from this journey has enlightened me with new ideas in this respect. With hindsight, I belief that by breaking further down the Agile elements, refrain from using the Agile terminology, and presenting participants with questions related to changing something they do today with a new way or practice, a subsequent study can take the form of a quantitative research to assess statistically the entire public service.

In addition to quantitative research, another useful method may be based on an experiment. An experiment that transforms a section into an Agile team and measures the output pre, during and post implementation. Saunders refers to this strategy as ‘within-subjects design’ where repeated measures of a series of interventions are recorded (2012:176). The experiment duration should be sufficient to allow the team to self-adjust to the most efficient and effective work cycle. A suggested roll-out plan is found in Appendix I. However, this approach has one major caveat, the buy-in of a very high level senior executive within the public service or a politician in order to approve the undertaking of such additional examination!

In the context of the public service the behaviour of professionals has been characterised by command and control rather than motivational ethos (Berman, 2008), and poor clarification of roles and well-defined operational practices (Buckingham and Coffman, 1999). Therefore, the importance of Agile processes that yield autonomy of staff and the incentives needed to respond quickly to changing demands is crucial to this environment. Governments that want to be more Agile need to minimise constraints and support staff to be able to take ownership of tasks, and commit itself to accomplish them according to set timelines based on effective standard operating practices (Parker and Bartlett, 2007).